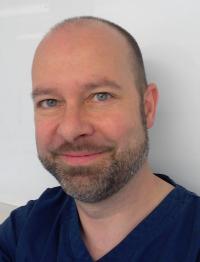 Robert qualified in 1989 from Plymouth School of Podiatry. He initially worked for the NHS in Leicester for 12 years, whilst also running a private practice in Loughborough. During this period, he gained experience in different aspects of podiatry: general skin care and dermatology; care of the 'high risk' foot, particularly in patients with diabetes; nail surgery and other minor surgical soft tissue procedures.

It was during this period that he became particularly interested in lower limb biomechanics and musculoskeletal and has become highly skilled in prescribing custom-made orthoses.

He returned to Devon in 2000, continuing to work for the NHS as a musculoskeletal specialist podiatrist.

Jo has worked as a Podiatry Assistant for over 10 years, both within the NHS and in private practice.

Jo's role is to assist the podiatrist in general clinics and during surgical procedures. However, Jo is also an autonomous practitioner, and is highly experienced in dealing with various foot health problems, especially dealing with 'difficult' toenails, such as those that are thickened, curved, or have become infected with fungus.

Copyright © 2023 Designed and Developed by sfimedia.com